Check the background of this firm on FINRA's BrokerCheck

There’s no way to overstate just how much the COVID-19 pandemic has disrupted our daily lives and the broader economy – and the municipal market is no exception. To take stock of where the muni market is now and what we should look for going forward, we turned to Baird Municipal Analyst Mike Schnetzer and Strategas’s Head of Fixed Income Research Tom Tzitzouris for their perspective.

The Effects of COVID-19

After the muni market closed out 2019 with $422 billion in new issuance, expectations for 2020 were fairly robust. How has the coronavirus impacted supply in the muni market?

Mike: A lot of folks, including us, were anticipating more of the same in 2020. The COVID-19 pandemic not only took a lot of supply offline, it also altered the supply mix. In response to the pandemic, issuers have been asking themselves, “We’re getting far less revenue than we typically do at this point in the year – how are we going to fund ourselves for the next several months?” To bridge that gap in cash flow, they’re tapping the capital markets, which means short-term notes – such as tax and revenue anticipation notes – will make up a larger percentage of the overall municipal issuance pie.

Tom: That’s right. States and towns are reluctant to make any issuance until they have an understanding of just how bad their revenue losses are going to be. I suspect supply will continue to be light for a while basically until borrowers need to come to market due to cash flow needs.

Has demand for munis remained intact?

Mike: So coming into 2020, municipal bond funds were in the middle of a record inflow streak, meaning demand had never been stronger. Obviously, the pandemic interrupted that trend in a major way in March with the volume of outflows erasing the 60+ weeks of inflows.

But right now it seems like demand is back on the upswing. Muni bond funds have seen consecutive weekly inflows, and we're also in the midst of the summer reinvestment season, when a lot of investors who receive principal and interest payments like to redeploy that cash back into the market.

Tom: From conversations I’ve had with clients, demand is strong and is likely to keep getting stronger. That's because – no surprise – there's been a reach for yield, and there's also been improvement in the overall assessment of the economy. Treasury yields are near all-time lows and some foreign bond interest rates are negative, making municipal bonds an attractive alternative. Demand is likely to strengthen as we continue into the summer, assuming we don’t encounter additional economic disruptions.

The Fed recently announced they’re keeping rates low for the foreseeable future as the economy tries to sort itself out. What effect would an accommodative Fed affect have on the muni market?

Mike: A sustained period with a low Fed funds policy rate should keep yield anchored on the front end, which should flow through to municipal yields. You could potentially see some steepening if we see signs of growth, but if you were to compare the yields of the 30-year muni, the 10-year muni and the five-year muni to where they've been historically, you’ll find them to be exceedingly low. 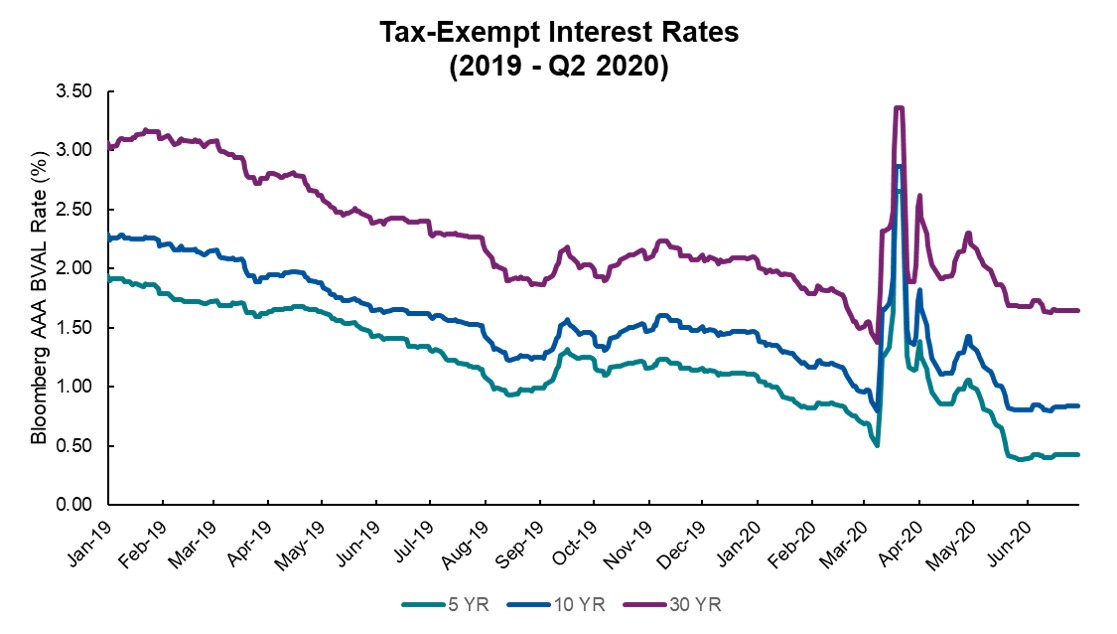 Tom: Our view is this interest rate environment, particularly on the short end of the curve, should be quite stable and very supportive of issuance. We’re not expecting a whole heck of a lot of volatility and yield there, and even at five years, there should be a pretty consistent, stable, slightly upward slope.

As we move toward the end of the summer, if the economic outlook continues to improve, you might see more volatility in ten-year bonds, which could cause interest rates in the muni market to steepen. We’ll have to wait and see.

Do you think the Fed target rate or U.S. Treasury rates will go negative, like we’ve seen in other countries around the world?

Tom: Not before early to mid-next year at the earliest. The Fed has other tools that should be much more effective. There's room to compress yields in the two- to five-year part of the curve by easily 25–30 basis points. That's an awful lot of stimulus you can deliver to the market without having to go to negative rates.

What about municipality credit ratings? It’s hard for cities and states to remain solvent when you’ve shut down most economic activity.

Mike: This is a tough one to forecast because there’s so much we're still learning about the outbreak. There's no denying tax revenues are being negatively impacted now due in part to the extension of the tax filing deadline. That being said, states and local governments have tools that can help them manage the downturn, like bridge loans or short-term notes we talked about previously, cash reserves that have been built up as a result of the record-long expansion since the 2008-09 recession and some support from Washington. In the past few months rating agencies have revised a number of outlooks lower, but by and large your traditional muni issuers – states, cities, counties, school districts and municipal enterprises like water, sewer and public power – they should be able to manage through. I think the long-term credit implications will hinge on how long this thing hangs around and what, if any, policies come out of Washington.

Tom: This is what worries me: While it might seem like we're in a recovery, if you’re a movie theater, you're a restaurant, you're a licensed massage therapist, you have not been able to do your job until very recently. That damage has been done, and the ramifications of that damage to the economy are still ahead of us. The recession is still ahead of us. The credit impairments in the muni space are still ahead of us. It’s possible we’ll see a weakening credit environment over the next six to 24 months, with the Northeast, upper Midwest, as well as some parts of the Appalachian Valley and the mid-Atlantic disproportionately hit. Plus, look at large urban areas – their population density is obviously a negative when it comes to the coronavirus and the cost of living – and now face-to-face service sector jobs came to an abrupt halt during lockdown. It all suggests it’s going to be a slow, very uneven recovery.

Can you talk about how the federal response to the pandemic could affect municipalities?

Mike: So by and large, what municipalities have been dealing with is declining revenues on the one hand and rising expenses on the other. Let's say you have a firehouse and one of your firefighters tests positive for the coronavirus. So they have to quarantine themselves, and now you have potentially more overtime for the remaining firefighters. Now multiply that scenario by thousands of cases across the country and dozens or maybe even hundreds of municipalities, and you can see how something very simple could result in an increase in expenses while your revenues are taking a nosedive.

So how does the federal government respond to this crisis? For starters, the CARES Act provided relief to certain states and issuer segments as they deal with the impact of the pandemic. The Federal Reserve also established the municipal liquidity facility to be a lender of last resort to help support states and some local governments finance their cash flow needs in the event that capital markets are not working properly. Interestingly, the House passed what is called the Health and Economic Recovery Omnibus Emergency Solutions, or HEROES, Act mid-June that would provide additional funding to state and local governments, but so far the Senate has not taken up the bill. All that said, with all the economic damage that’s been done, it would be welcome relief if the federal government would provide direct fiscal aid to state and local governments above and beyond what they've done so far.

Tom: On that point, we at Strategas think there’ll be another round of about a trillion dollars of stimulus, maybe later in the summer. It won’t be as big as was originally expected, and it could get whittled down to as little as $750 billion, but we think it will pass.

Despite skyrocketing unemployment numbers, the country is starting to open up economically. How would that impact the muni market?

Tom: We're not the slightest bit surprised to see a very large rebound from what were abysmal economic numbers this spring. Right now, we expect what we call a square root-shaped economic recovery. 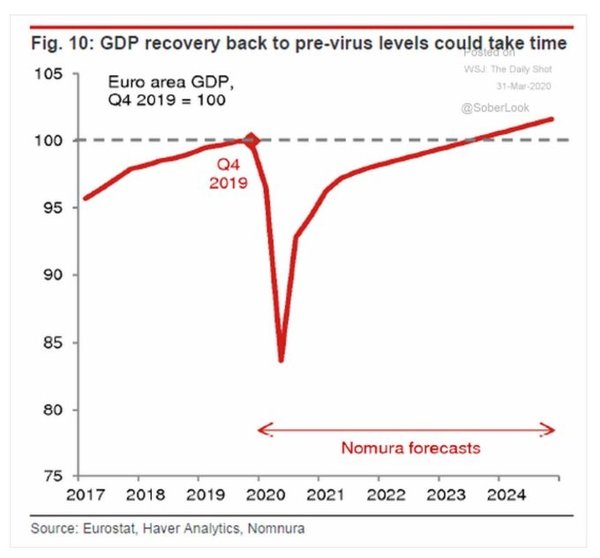 In the early going it looks V-shaped, where employment numbers – specifically payroll and manufacturing data – are going to spike rapidly in the first few months of the recovery. We expected to see that change in the payroll and manufacturing numbers in June, not May, but now that it's here, we really don't expect it to stop for at least another three or four months now. But as the reality of the recession hits and states start to talk about furloughs and layoffs later in the summer, we expect growth to start to slow and those numbers to level off, giving it more of a square root shape.

It sounds like you’re anticipating longer-lasting damage to the economy.

Tom: To me, there’s a sort of economic watershed when there’s a mismatch between the skills the labor market provides and the skills businesses demand. Think back to the great financial crisis in 2009: We had an enormous amount of construction labor related to home building and retail labor related to household consumption that basically became obsolete. Fast forward to today and what do you see? A lot of people in the transportation space, the entertainment sector and the educational sector are going to find their jobs are generally not needed anymore because we're going to do more remote work. We're going to do a lot more online learning. Our needs for business travel are going to be muted for quite some time. And unlike 2008–2009, where we had over 18 months to adjust, we just did it over 18 weeks. That's a really short time to basically tell about a third of your labor market, “Oh, by the way, you're obsolete and you may never have a job again.”

So, if you ask me “What are the long-term implications of this,” it's really a question of how quickly do Americans decide the world is different – I need to adjust, I'm going to train, I'm going to move my family and we're going to start over again. If it's anything like what we saw in the ‘80s and ‘90s, it will be quick. If it's like the 1970’s or 2008, it's going to take years.

I wish I could be more optimistic on this, and the May jobs report may be the first indication that I'll be pleasantly surprised, but I'm not optimistic at this point yet.

Mike, what are you anticipating going forward?

Mike: To me, it all depends on how effectively we manage the COVID-19 virus – how well we address the current pandemic, if there is another wave later in the year, if we need a second economic shutdown. If we're truly talking about worst case, it would be a combination of that and then some failure of Congress to enact additional fiscal relief. If there is no relief bill, that would portend that munis are in for a bumpy ride. Quite frankly, a lot of economic sectors would be in for a bumpy ride.

The positive outlook would be if we get a fiscal relief bill sooner rather than later, or perhaps if the pandemic is not as severe as maybe once feared. It’s just too early to tell right now.

For the latest views into what’s moving the municipal market, be sure to check out our Fixed Income News and Insights page or visit the Strategas website. 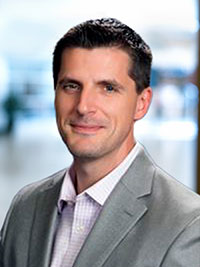 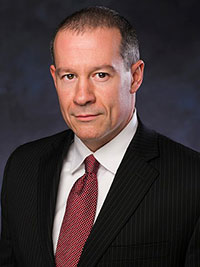