These Are a Few of My Favorite Quotes

With all apologies to Rodgers and Hammerstein and The Sound of Music:

When the dog bites,
When my stocks fall,
When my bonds go bad,
I simply remember my favorite quotes
And then I don’t feel so sad!

John, in the couple of weeks since we last spoke, a lot has changed in the world, which may be the understatement of my blogging life. I won’t lie – there have been many moments where I struggled to understand what the market was thinking. The last three weekly jobless claims reports have seen more than 20 million people file for new unemployment claims – something that has never happened before – and yet the market closed positive all three weeks. It’s just mind-blowing.

When the world seems upside-down, I tend to look for wisdom from people I respect both in modern day and from the past. Let’s spend a moment sharing some quotes that could help guide our thinking while we go through this turbulent event. I’ll go first.

"There is nothing new on Wall Street. What has happened in the past will happen again, and again, and again. This is because human nature does not change, and it is human emotion ... that always gets in the way of human intelligence. Of this I am sure." – Jesse Livermore

If you don’t already know, Jesse Livermore was an American stock trader in the early 1900s who lived through some of the most harrowing markets this country has ever seen. He was also the basis for the main character in Reminiscences of a Stock Operator, which in my opinion is a must-read. His quote reminds me that humans are filled with emotions that can sabotage even the smartest person. While this crisis is unique in the sense that it is both a financial crisis and a health crisis, one thing that is not unique to what we are going through is volatility. There have been many scary markets in the past and there will be many in the future – that’s just the nature of investing. You can’t let emotion get the best of you or else all your well-laid plans will be for naught.

Thanks, Mike. I’ll see your Jesse Livermore quote and raise it with three of my favorites.

After studying World War II and its extreme effects on personal fortunes, Biggs concludes that a straightforward, 60% stocks / 40% bonds allocation works just about as well as any other investment strategy. He also cautions not to wait for signs of trouble – by then it’s too late.

“Our ability to model the world may be dwarfed by increases in complexity – implying a greater and greater role for the unpredicted.” – Nassim Nicholas Taleb, The Black Swan

If arrogance were a virtue, Taleb would be a saint. But his key insight is priceless: Our increasingly interconnected and complex world is more fragile than ever before, and we need to protect against so-called “black swans,” which by definition we can’t foresee.

“To finish first, you must first finish.” – Warren Buffett, 2010 Letter to Shareholders

This is the ultimate in folksy business wisdom. It explains why Berkshire Hathaway has a fortress-like stash of over $100 billion in cash – to assure its survival in times like this.

You know what would make me feel better? A dinner with you where we share laughter and red wine. Your quotes are really good – let me finish with one more that was actually said this year.

“The investor’s goal should be to make a large number of good buys, not just a few perfect ones.” – Howard Marks

Was March 23, 2020, the bottom? It’s a question we’ve all been asking, but if we use Marks’ wisdom as our guide, it’s the wrong question. Instead we should be asking ourselves, “Is right now a place for a ‘good buy’?”

When we invest, we’re not trying to nail the absolute bottom. We never will, because only history shows us where the bottom was. What we ideally want to do is make a series of “good buys” and let those decisions compound over time to help us reach our goals. It’s how legends like Marks and Buffett memorialized themselves as all-time great investors: They saw value in the market and invested their capital even acknowledging that things could still go lower. Stop obsessing over the bottom – it’s unhealthy and ultimately unproductive. Howard Marks isn’t – why would you?

Can a Stock Market Selloff Be a Good Thing?

When a down market can be a blessing in disguise. 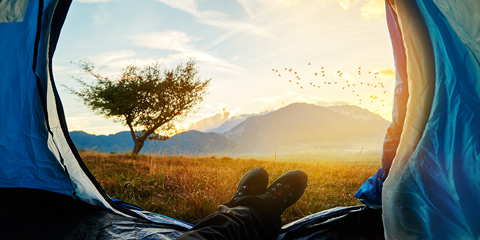